Posted on March 8, 2018 by thompsonbrookpto

Thompson Brook School students are nothing less than SUPERCALIFRAGILISTICEXPIALIDOCIOUS in Disney and Cameron Mackintosh’s Mary Poppins JR. The “practically perfect” 70-minute musical, designed for middle school-aged performers, is based on the classic P.L. Travers stories and the Walt Disney film. Show dates are: Friday, March 23, and Saturday, March 24, at 7:30 p.m. and Sunday, March 25, at 2:00 p.m. Performances will take place at Thompson Brook School, 150 Thompson Road, Avon. Tickets are $10.00 per adult and $8.00 per child. For information on purchasing tickets, please CLICK HERE. 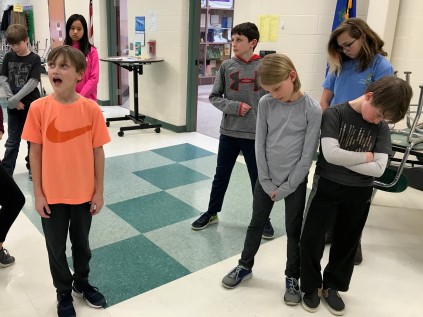 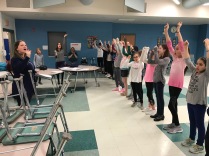 All of London is shouting from the rooftops about this exciting stage adaptation of the classic tales of Mary Poppins (played by Mia Weber). Join the Banks family (Jane played by Leah Cuyler, Michael played by Kai Logan, Mr. Banks played by William Nusom, and Mrs. Banks played by Sydney Caso) as they encounter adventure after fun-filled adventure with their curious new nanny, Mary Poppins, as well as chimney sweep Bert (played by Brendan Harris). Adapted especially for young performers, this musical includes favorite Sherman brothers songs such as “A Spoonful of Sugar,” “Feed the Birds,” and “Supercalifragilisticexpialidocious,” as well as wonderful new songs by George Stiles and Anthony Drewe. With colorful characters and an irresistible score, Mary Poppins JR. is sure to be a crowd-pleaser for all ages!

Working with director Terri Schulman, musical director Laura Harris, and choreographer Ann Schwenzer, more than 50 Thompson Brook School fifth and sixth graders have been rehearsing both on stage and behind the scenes in dozens of different roles since the end of December. The annual TBS Spring Musical is sponsored by the PTO. Proceeds from previous years’ productions have helped purchase such after school theatre wish list items as backstage headsets, character microphones, scenery, and props.

Disney and Cameron Mackintosh’s Mary Poppins JR. is presented through special arrangement with and all materials are provided by Music Theatre International. For more information about licensing Mary Poppins JR. or other Disney shows, please visit www.DisneyMusicals.com.

Music Theatre International (MTI) is one of the world’s leading theatrical licensing agencies, granting theatres from around the world the rights to perform the greatest selection of musicals from Broadway and beyond. Founded in 1952 by composer Frank Loesser and orchestrator Don Walker, MTI is a driving force in advancing musical theatre as a vibrant and engaging art form.

MTI works directly with the composers, lyricists and book writers of these musicals to provide official scripts, musical materials, and dynamic theatrical resources to over 70,000 professional, community, and school theatres in the US and in over 60 countries worldwide.

MTI is particularly dedicated to educational theatre and has created special collections to meet the needs of various types of performers and audiences. MTI’s Broadway Junior™ shows are 30- and 60-minute musicals for performance by elementary and middle school-aged performers, while MTI’s School Editions are musicals annotated for performance by high school students.